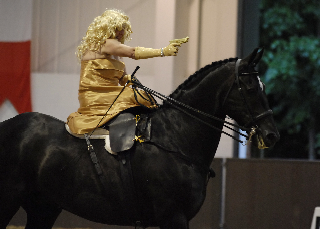 James Bond Breakfast at The Dorchester

If you are in London on 26 August do the  James Bond Breakfast at The Dorchester, Quote “Solo”  and get a free copy and i-pad download of William Boyd’s new Bond Book.

Will there be Bond Girls serving up the Martini’s? Whoo Hoo !

Here is a picture of Buster Bond  and Babette (Girl with the Golden Gun) at the Side Saddle Championships Caro Cripps competition performing to the James Bond Theme.

It was an hilarious time for two thousand one legged women who all nearly died laughing!