My friend, Phil Reeve, who lives up on Dartmoor where there are lots of Goblins, Tree Elves, Dragons and Cloud Maidens has had a big success with GOBLINS which is now taking the USA by storm!

It is going to be an animated film as well.

I am reading the book at the moment. It is dead good and everyone MUST get one now or be eaten by a Troll!

The goblins of CLOVESTONE KEEP are a bloodthirsty lot. They love fighting, looting and eating.   And more fighting. But Skarper is different.   He is clever and cunning.   Only he understands that the old MAGIC trapped beneath CLOVENSTONE is rising again.   He’s about to be flung headfirst into the wildest adventure in all of goblin history… 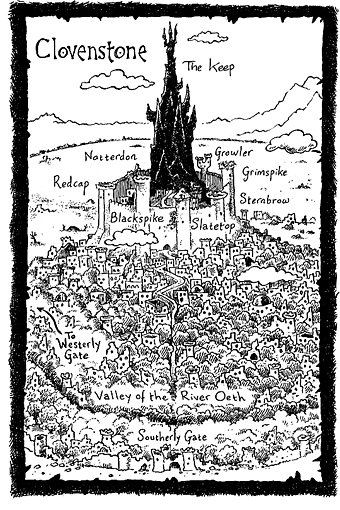 It all started about two years ago, when Sam went through a brief trolls’n’goblins phase himself, and I read him The Hobbit and The Lord of the Rings.  It reminded me of how much I used to love stories like that when I was growing up, and made me wonder if I could do one of my own.
I wasn’t really after the high seriousness of Tolkien, though:
I was aiming for something lighter and funnier that would be a change of pace for me before I embark on the final Fever Crumb book.   So I started writing a long, rambling comedy adventure which I read to Sam in installments as a bedtime story.

One of the things that always troubled me about The Lord of the Rings, even as a boy, was the way that all the orcs and goblins are evil.  All of them? It seemed a bit unfair to me: surely there must be some who were just fighting in the armies of the Dark Lord because they’d been conscripted, and would have preferred to lead a quiet life somewhere given half the chance.