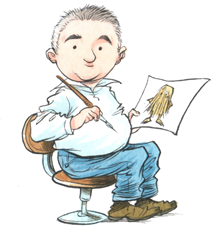 Chris Riddell named ninth children’s laureate. Pan Macmillan announces that Chris Riddell has been appointed the new Children’s Laureate 2015 – 2017. Pan Macmillan is the longstanding publisher for Riddell’s authored and illustrated work, including the acclaimed and award-winning Goth Girl and Ottoline series, and his collaborations with author Paul Stewart on the Muddle Earth and Blobheads series.

Pan Macmillan announces that Chris Riddell has been appointed the new Children’s Laureate 2015 – 2017. Pan Macmillan is the longstanding publisher for Riddell’s authored and illustrated work, including the acclaimed and award-winning Goth Girl and Ottoline series, and his collaborations with author Paul Stewart on the Muddle Earth and Blobheads series.

In his acceptance speech at the ceremony today, Riddell revealed plans to put visual literacy at the heart of his term of office. He will use his Laureate’s Log – an online visual diary of his time in the role – to entertain and inform those who follow his progress, and encourage families to keep their own visual diaries.

He said: “I am humbled to take on this role after the giants that have come before me. I want to put the joy of creativity, of drawing every day, of having a go and being surprised at what one can achieve with just a pencil and an idea at the heart of my term as Laureate.”

He will also work to widely celebrate and defend school libraries and librarians who, together with parents, match children with books that will inspire and help them grow into great readers and thinkers. He intends to emphasise the excitement of illustration at live events, both alone and with unexpected collaborators from across the arts.

Riddell said: “I’m interested in illustration in all its forms, not only in books for children but in posters, prints and performance, as a way of drawing people into books and stories. I want to continue to explore interesting ways to bring words and pictures together over the next two years.”

The role of Children’s Laureate is awarded once every two years to an eminent author or illustrator of children’s books to celebrate outstanding achievement in their field and to acknowledge their importance in creating the readers of tomorrow. The announcement of his role as Children’s Laureate comes on the back of a succession of notable award listings for Riddell’s Goth Girl series, including the Specsavers National Book Award 2013 and 2014, the Blue Peter Book Award 2015 and the CILIP Kate Greenaway Medal 2015. The first book in the series, Goth Girl and the Ghost of a Mouse, won the Costa Children’s Book Award 2013. He has also won numerous accolades for his picture books for younger children, including the Emperor of Absurdia and Alienography.

Chris Riddell is a prolific writer and illustrator whose work is familiar to both children and adults. He is known especially for his distinctive line drawings with their clever caricature, fascinating detail and often enchanting fantasy elements. He has worked widely with a variety of collaborators including Paul Stewart, Neil Gaiman and Russell Brand. In addition to his children’s books, Chris is a renowned political cartoonist whose work appears in The Observer, The Literary Review and The New Statesman. He lives in Brighton with his wife and has three grown-up children. More information can be found at www.chrisriddell.co.uk or on Facebook. Chris can also be followed on Twitter and Instagram (@chrisriddell50).

The selection committee consider nominations for the Children’s Laureate from a range of organisations representing librarians, publishers, writers, illustrators, literature development workers, including the International Board on Books for Young People (IBBY) and booksellers. They also consider authors and illustrators nominated by children who vote online through the Children’s Laureate website.